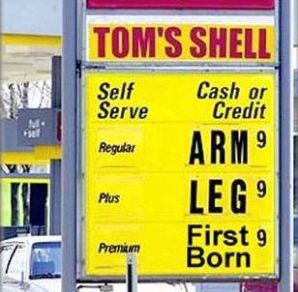 Get yourself a Chevy Volt; this isn’t going away.

The simple truth of the matter is this: most of the world’s easy reserves have already been depleted — except for those in war-torn countries like Iraq. Virtually all of the oil that’s left is contained in harder-to-reach, tougher reserves. These include deep-offshore oil, Arctic oil, and shale oil, along with Canadian “oil sands” — which are not composed of oil at all, but of mud, sand, and tar-like bitumen. So-called unconventional reserves of these types can be exploited, but often at a staggering price, not just in dollars but also in damage to the environment.

In the oil business, this reality was first acknowledged by the chairman and CEO of Chevron, David O’Reilly, in a 2005 letter published in many American newspapers. “One thing is clear,” he wrote, “the era of easy oil is over.” Not only were many existing oil fields in decline, he noted, but “new energy discoveries are mainly occurring in places where resources are difficult to extract, physically, economically, and even politically.”

Further evidence for this shift was provided by the International Energy Agency (IEA) in a 2010 review of world oil prospects. In preparation for its report, the agency examined historic yields at the world’s largest producing fields — the “easy oil” on which the world still relies for the overwhelming bulk of its energy. The results were astonishing: those fields were expected to lose three-quarters of their productive capacity over the next 25 years, eliminating 52 million barrels per day from the world’s oil supplies, or about 75% of current world crude oil output. The implications were staggering: either find new oil to replace those 52 million barrels or the Age of Petroleum will soon draw to a close and the world economy would collapse.

Shifting the world to 100% clean, renewable energy by 2030 – here are the numbers 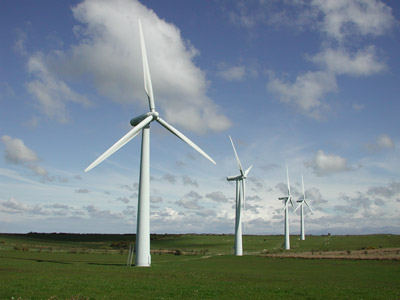 Study: Shifting the world to 100% clean, renewable energy by 2030 – here are the numbers
Wind, water and solar energy resources are sufficiently available to provide all the world’s energy. Converting to electricity and hydrogen powered by these sources would reduce world power demand by 30 percent, thereby avoiding 13,000 coal power plants. Materials and costs are not limitations to these conversions, but politics may be, say Stanford and UC researchers who have mapped out a blueprint for powering the world.

Most of the technology needed to shift the world from fossil fuel to clean, renewable energy already exists. Implementing that technology requires overcoming obstacles in planning and politics, but doing so could result in a 30 percent decrease in global power demand, say Stanford civil and environmental engineering Professor Mark Z. Jacobson and University of California-Davis researcher Mark Delucchi.

To make clear the extent of those hurdles – and how they could be overcome – they have written an article that is the cover story in the November issue of Scientific American. In it, they present new research mapping out and evaluating a quantitative plan for powering the entire world on wind, water and solar energy, including an assessment of the materials needed and costs. And it will ultimately be cheaper than sticking with fossil fuel or going nuclear, they say.

The key is turning to wind, water and solar energy to generate electrical power – making a massive commitment to them – and eliminating combustion as a way to generate power for vehicles as well as for normal electricity use.

The problem lies in the use of fossil fuels and biomass combustion, which are notoriously inefficient at producing usable energy. For example, when gasoline is used to power a vehicle, at least 80 percent of the energy produced is wasted as heat.

With vehicles that run on electricity, it’s the opposite. Roughly 80 percent of the energy supplied to the vehicle is converted into motion, with only 20 percent lost as heat. Other combustion devices can similarly be replaced with electricity or with hydrogen produced by electricity.
…
The Scientific American article provides a quantification of global solar and wind resources based on new research by Jacobson and Delucchi.

Analyzing only on-land locations with a high potential for producing power, they found that even if wind were the only method used to generate power, the potential for wind energy production is 5 to 15 times greater than what is needed to power the entire world. For solar energy, the comparable calculation found that solar could produce about 30 times the amount needed.

If the world built just enough wind and solar installations to meet the projected demand for the scenario outlined in the article, an area smaller than the borough of Manhattan would be sufficient for the wind turbines themselves. Allowing for the required amount of space between the turbines boosts the needed acreage up to 1 percent of Earth’s land area, but the spaces between could be used for crops or grazing. The various non-rooftop solar power installations would need about a third of 1 percent of the world’s land, so altogether about 1.3 percent of the land surface would suffice. 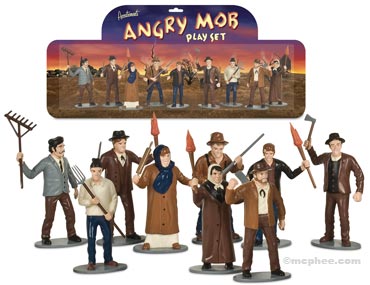 This is brown shirt stuff, people. It worked in 1994, and they’re going at it again.
ThinkProgress

This morning, Politico reported that Democratic members of Congress are increasingly being harassed by “angry, sign-carrying mobs and disruptive behavior” at local town halls. For example, in one incident, right-wing protesters surrounded Rep. Tim Bishop (D-NY) and forced police officers to have to escort him to his car for safety.

This growing phenomenon is often marked by violence and absurdity. Recently, right-wing demonstrators hung Rep. Frank Kratovil (D-MD) in effigy outside of his office. Missing from the reporting of these stories is the fact that much of these protests are coordinated by public relations firms and lobbyists who have a stake in opposing President Obama’s reforms.

The lobbyist-run groups Americans for Prosperity and FreedomWorks, which orchestrated the anti-Obama tea parties earlier this year, are now pursuing an aggressive strategy to create an image of mass public opposition to health care and clean energy reform. A leaked memo from Bob MacGuffie, a volunteer with the FreedomWorks website Tea Party Patriots, details how members should be infiltrating town halls and harassing Democratic members of Congress:

– Artificially Inflate Your Numbers: “Spread out in the hall and try to be in the front half. The objective is to put the Rep on the defensive with your questions and follow-up. The Rep should be made to feel that a majority, and if not, a significant portion of at least the audience, opposes the socialist agenda of Washington.”

– Be Disruptive Early And Often: “You need to rock-the-boat early in the Rep’s presentation, Watch for an opportunity to yell out and challenge the Rep’s statements early.”

– Try To “Rattle Him,” Not Have An Intelligent Debate: “The goal is to rattle him, get him off his prepared script and agenda. If he says something outrageous, stand up and shout out and sit right back down. Look for these opportunities before he even takes questions.”

The memo above also resembles the talking points being distributed by FreedomWorks for pushing an anti-health reform assault all summer. Patients United, a front group maintained by Americans for Prosperity, is currently busing people all over the country for more protests against Democratic members. Rep. Pete Sessions (R-TX), chairman of the NRCC, has endorsed the strategy, telling the Politico the days of civil town halls are now “over.”

Meanwhile, AHIP, the trade group and lobbying juggernaut representing the health insurance industry is sending staffers to monitor town halls and other right-wing front groups are stepping up their ad campaign to smear reform efforts. The strategy for defeating reform — recently outlined by an influential lobbyist to the Hill newspaper as “delay” then “kill” — is becoming apparent. By delaying a vote until after the August recess, lobbyists are now seizing upon recess town halls as opportunities to ambush lawmakers and fool them into believing there is wide opposition to reform.

On 4 November 1921 the Nazi party held a large public meeting in the Munich Hofbräuhaus. After Hitler had spoken for some time the meeting erupted into a melee in which a small company of SA distinguished itself by thrashing the opposition. The Nazis called this event “Saalschlacht” (meeting hall battle) and it assumed legendary proportions in SA lore with the passage of time. Thereafter, the group was officially known as the Sturmabteilung.[7]

UPDATE: ThinkProgress documents the use of these tactics across the country. Disgusting, unethical, dishonest, even unconstitutional…in the tradition of Karl Rove.
Digby points out how the GOP used this stuff in 1994 to defeat healthcare reform:

This is predictable. After all, they are following the 1994 playbook and they did the same thing then. This is from the PBS timeline of the Clinton health care debate:

July 22, 1994 – Trying to win back the kind of political support that brought them to the White House, the administration plans a bus trek across America to generate their own grassroots message to Congress for reform. A kickoff rally in Portland, Oregon, is marred by anti-Clinton protesters. When the first buses reach the highway they find a broken-down bus wreathed in red tape symbolizing government bureaucracy and hitched to a tow truck labeled, “This is Clinton Health Care.”

The anti-bus trek protests are the crowning success of the No Name Coalition and especially of the conservative political interest group Citizens for a Sound Economy (CSE). By the time the ill-fated bus caravan takes to the highways, CSE operatives, working closely — and secretly — with Newt Gingrich’s Capitol Hill office and with Republican senators, have mapped out plans to derail the Reform Riders wherever they go.

July 23, 1994 – Following several days of anti-Hillary rhetoric on local talk shows, Hillary Clinton — at a bus rally in Seattle — is confronted by hundreds of angry men shouting that the Clintons are going to destroy their way of life, ban guns, extend abortion rights, protect gays, and socialize medicine. When she finishes speaking and tries to leave the rally, her limousine is surrounded by protesters. Each of the four caravan routes becomes an expedition into enemy territory — with better-armed, better-prepared, better-mobilized anti-Clinton protesters at each stop along the way. Local reform groups and caravan organizers are forced to cancel scheduled stops because of implicit threats of violence.